You may have heard about the Tax Day Tea Party which is planning demonstrations all over the country to protest what's happening with the stimulus plan and bail outs that no one, at least no one that I know of, wants. You can find out what's happening in your state and join in this modern day tea party. 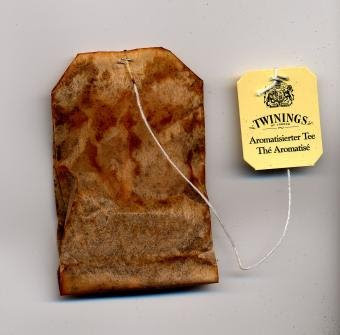 You also may have heard about the plan to mail tea bags to your senators, representatives, the president himself. I understand that an actual tea bag won't be delivered because of security precautions. But you can send, via snail mail, e-mail or fax, this picture of a tea bag, or even just the tag from a tea bag, along with a note of protest. The idea is to make ourselves, being the silent majority, heard loudly that we are unhappy about the current direction our country has taken. It seems that those who we elected to represent us have forgotten who they work for. Let's remind them! Here's a link so you can find out who your elected officials are and where to send it http://www.govtrack.us/

And while I'm on a roll I'll give you the link to the 9/12 project which is a place for you and other like-minded Americans looking for direction in taking back the control of our country. 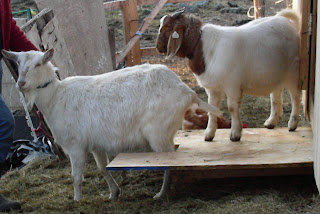 Our Boer goat buck, Cassanova, is only 10 months old. Although he's more than willing to live up to his name sake and gives a valiant try, he's still too short to reach the taller does. So I built this platform that he stands on and she backs into the cutout. Works like a charm! Can't leave the doe in his pen though as she doesn't get into position on her own, silly girl, and it only frustrates him to keep trying and not accomplish anything. So I bring her in for conjugal visits, back her into position, and voila! mission accomplished. Ingenious if I do say so myself.
at 6:49 PM 5 comments:

King of the Mountain (aka Chicken Coop) 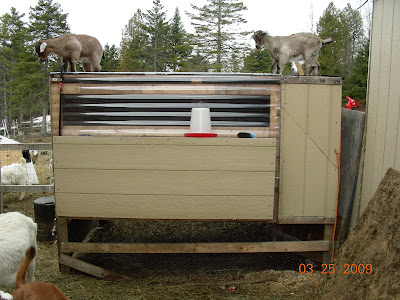 They all look alike if you ask me. Their moms tell who their own lambs are by sniffing their bums. Since I don't have that keen sense of smell, nor am I about to get down on my hands and knees to sniff backsides, ear tags tell me who's who. Today was such a beautiful, sunny day all the youngins decided to take a nap in the sun. Just moments before I snapped the picture the goat kids were among the group. But being typical goats they couldn't stand that they weren't causing trouble so when they saw me kneel down with the camera they jumped up and ran to help me take the picture, followed by one of the bottle lambs. Just like my own kids, they can never hold still long enough to capture the moment.
at 8:08 PM 6 comments:

I'm SO Proud of Myself!

"Why?" you ask. Well, I'm glad you asked that question.

Let me first begin by saying we're done with lambing - that is to say all our ewes who were pregnant aren't anymore. We had 6 ewes lamb this spring with 3 sets of twins. I'll do the math for you - that's 9 new lambs, plus the one that was born last November, makes 10 we can sell next fall. That'll pay for winter hay and feed. All births went smoothly - no breeches, no twins trying to come out at the same time, all mothers taking care of their babies.

Well, almost - I did have one that got rather confused and thought the lamb in the next pen over was hers, rejecting her own. I put a piece of plywood between the pens so she couldn't see into her neighbor's pen, then had to pin her up against a wall so she would let her lamb nurse. As it was about 2:00 in the morning at this point, I went to bed figuring I'd have to deal with a bottle baby in the morning. By 7:00 a.m. she figured the one that was with her was good enough and was taking care of it. I'm not sure whether she was just confused, being a first-time mom, or was having a severe case of the post-partum crazies. Whatever it was, she seems to have worked it out.

Also had a lamb from one of the sets of twins that got scours when it was a day old. That's a bacterial diarrhea and the smell is unmistakable! Almost lost the little one but after a day of antibiotics and some electrolyte replacement it was as good as new. Kept up the antibiotic for several days though just to make sure it was under control.

Then the last set of twins, as a matter of fact, the very last lamb born, just wasn't as vigorous as I would have liked. So I coaxed him to nurse frequently. Now lambs are kind of scrawny when they're first born, looking sort of like white, wrinkled old men. Their skin is kind of big for them and they have to fill it out. I noticed after a few days that last lamb still wasn't fitting in his skin so I figured his mom may not have quite enough milk for twins and his more vigorous brother was pushing him out at feeding time and grabbing all the goodies for himself. So I started supplementing him with goats milk and, sure enough, he puffed right out and got stronger fast. Now he's trying to crowd out his brother. I'll still supplement a little just to make sure he continues to get enough.

But the reason I'm really proud of myself (now you knew I'd get to this eventually didn't you?) is that one of the ewes prolapsed after lambing. For those who don't know what that is, maybe you don't want to. But for the brave, or those with a strong stomach, it's when her insides begin to move outside! This was a vaginal prolapse where the vaginal wall basically falls outside, or turns inside out. I won't go into detail about why this happens, but suffice it to say it's not pretty. Anyway, I put on a glove, washed her off, put her insides back inside, and put in a prolapse retainer, which is kind of like a flat plastic spoon that fits inside to hold everything in place. Then I gave her a shot of long-acting penicillin. After 3 days (which is the recommended time) I removed the retainer. Next morning she was prolapsing again. So back to gloving up, washing her off, putting her insides back where they belong. This time I put some stitches (also a recommended thing) in her vulva to hold everything shut and gave her another shot of penicillin. So far, so good - she's holding everything together.

When I was a kid I wanted to be a vet when I grew up. Well, I'm not a vet, but I'm at least able to do what I need to, when I need to. This was my first lamb with scours, my first lamb I have to supplement, and my first ewe to prolapse. I'm starting to feel like I might actually know what I'm doing.
at 10:58 PM 3 comments:

Here's a humorous look at 2nd amendment rights. Wouldn't want to be a gunman in this store! I often wonder how far the insane shooters, that we've been hearing about on the news lately, would get, or if they would even try it, if others were armed as well. My husband always says (which probably isn't original but he's the only one I've ever heard say it so I'll attribute it to him) "an armed society is a polite society". My opinion is that we have very low crime rates here in the Great North Woods because most everyone is armed. We have a population of hunters, farmers, lumberjacks etc, and our tourists are sportsmen, snowmobilers, 4-wheelers and the like. Most everyone is well equipped to defend life and property. The only break-ins are to vacant weekend/seasonal camps. You never know who's armed and who isn't so it's just not worth the chance. Enjoy the video, and feel free to leave a comment. I love comments!

P.S. A few people have told me they can't play this video but most people can. So if you're one of those who have trouble here's the direct link - it's worth a "look see". Shopping in Texas
at 2:32 PM 9 comments:

Hey, just because I live in the mountains, far from what most would call civilization (I have to travel 1 1/2 hours to the nearest Wal-Mart or traffic light) doesn't mean we don't have entertainment. Check out this exotic, HOT pole dancer. (OK, so this video was actually taken in Glacier National Park, and the bear is a grizzly. But it COULD be a black bear, and it COULD happen around these parts. Just saying.)

Androscoggin, a very beautiful Partridge Rock rooster, died today at American Way Farm, in northern NH, after a brief scuffle with his owner, Sandy. Over the past several weeks he and Sandy seemed to have come to an understanding about his bad behavior, or so she thought. Yesterday Androscoggin was sitting on a fence post and when Sandy tried to open the gate, he flew at her aggressively, but retreated to the safety of the hen house upon confrontation. When she caught up with him she had yet another "discussion" with him about what behavior would and would not be tolerated and they parted ways with the understanding, at least on Sandy's part, that one more time would be one time too many. Today while Sandy was tending a new-born lamb, Androscoggin saw his opportunity to inflict revenge and attacked, attempting to flog her leg. Sandy left the lamb, grabbed a .22, aimed and fired, which resulted in his quick death. She then tossed the body over the fence into the waiting jaws of the dog. All that is left for burial are his feathers and a few entrails. There will be a brief memorial service this evening from 8:00 to 8:01 p.m. with burial of any remains when the snow melts. No charges are being brought against his owner as it was a clear case of self defense. Androscoggin Rooster is survived by 12 hens who don't seem to miss him very much. Condolences and expressions of sympathy can be sent to the family via comments on this post.
at 5:56 PM 32 comments: