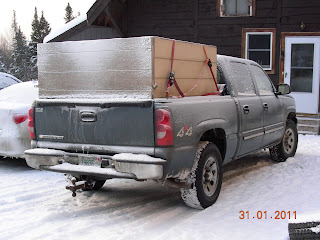 Hey, don't laugh. And yes, it's mine. We needed a way to transport just a few animals, like sheep, goats or pigs, without having to hook up the 2 horse trailer each time. And an actual truck cap is very expensive. So we built this wooden box to the size of the truck bed and strap it down with ratchet straps. It's made from a frame of 2x4s with barn siding covering it. The back swings up just like a regular, bona fide truck cap would. But hey, it works. Farmers are very inventive people when the need arises. I guess that makes me a redneck with a New Hampshire accent. But I'm OK with that - a-yup.

You know it's cold when.... Sounds like the beginning of a list of one-liners. The horse had icicles hanging from his whiskers this morning as the moisture from his breath froze on them. The dogs were very anxious to get into the barn for breakfast, and the chickens didn't move until at least 7:00. The thermometer registered -17 F. Yes, you read that correctly - that's 17 below. Actually, I think that's kind of a heat wave for this time of year when temps can dip to -40 for weeks, reaching a daytime high of -20. So we're having a mild winter comparatively speaking.
Of course any time we hit a cold spell folks always remember a time when.... take your pick of things from their life's experiences that happened at one time or another. My memory goes to a time when it was -40. I was in my bathrobe and slippers, opened the back door and stepped out to put a bag of trash in the garbage can. The door closed behind me. I hadn't turned the little doohickey on the inside that unlocks the door. So I was locked out. In the -40 cold. In my bathrobe and slippers.
A number of things went through my mind which were quickly dismissed - like walking to my neighbors house 1/2 mile away, like hotwiring the truck to drive to my neighbor's house 1/2 mile away, like breaking a window to get inside. That last idea seemed to be the only viable solution, although I envisioned hours spent cleaning up the broken glass, sealing up the window so all the heat wasn't sucked out of the house, and taking the door off in the spring to have the window repaired, not to mention the expense of a double pane thermal door window. I knew I wouldn't last long out in that cold so I hurried to the workshop, retrieved a hammer, and just before smashing out the window I looked heavenward and pleaded with the almighty, "OK, I'm about to break a window. If you have any better ideas please let me know now." In an instant a voice inside my head said, "Hit the door handle." "OK," I thought, "can't hurt to try."
Do you have any idea what metal is like at -40? It smashed into a hundred pieces with the first hit. The second hit popped out the latch. And voila! I was inside. I don't think I've had many times in my life that I was so appreciative of warmth, or of divine inspiration. And all it cost was a door handle. 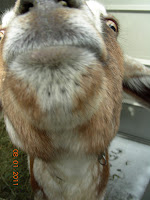 The day began like any other. Get up and dressed, let dogs out, get fire going in stove, put on multiple layers of clothing, head out to barn. Give hay to horse, give hay to goats, feed chickens, feed dogs, get water for everyone, collect eggs, wash eggs, take off multiple layers of clothing, get human breakfast. Then about 11 o'clock we hitched up the horse trailer and loaded the does (that's female goats for you non-goat people) to transport them to their new home. When we arrived there and got them settled in their new digs, I knelt down to say my goodbyes. They all gave me kisses and hugs, as only goats can do. They all tried to get in my face at once. Some nibbled on my hair while others gently tugged on my jacket. They all tugged on my heart. I miss them already. But.... I will be getting 3 of their babies back next summer so we can keep the brush trimmed. Without them I fear all our land clearing will be quickly overgrown. So goodbye for now goaties, but since I'm addicted to goats, it'll only be a short while till I get some new friends.

Meanwhile, I still have to sell the buck who is moaning pitifully because his ladies are gone.

DH has been very busy lately. He's sent 5 goats and 2 pigs to freezer camp. Finishing up the last pig he was tired and in a hurry to get the job done before dark. That's a recipe for disaster. I was in the barn finishing up cleaning the chicken coop and worming goats. The recent mild temperatures thawed the month long litter on the coop floor allowing for easy cleaning. I was just about done when I heard a loud "AHHHHH" from DH who was out in the driveway working on the last pig. I knew instantly that it wasn't the kind of "ahhhhh" that announced he'd dropped his knife and now had to clean it off, or even that he'd dropped the hose and it had squirted him in the face, but rather the kind of "AHHHHH" he would make if he dropped a cement block on his foot, smashed his finger with a hammer, or cut himself. So I listened up, but didn't hear the thud of a body collapsing in the driveway so that meant he was still standing at least. Next thing I know he's coming in the barn, his finger wrapped in a rag, and asked "Can you take a look at this and tell me if you think I'm going to need stitches?"
It's a good thing I'm not the squeamish kind. He unwrapped his finger and there was a large gaping cut going all the way to the bone. "Ah, yup," I said, "that's gonna need stitches all right." (Sorry I didn't take a picture of it but you probably wouldn't have wanted to see it anyway.) I quickly finished up worming the last few goats, then just dumped a bag of shavings in the middle of the coop floor. Grandson came out to help get the pig loaded into the back of the truck with the rest of the dead bodies of the day. And off to the hospital we went.
Now here's the difference between men and women. I would have taken the time to change my clothes first. He was wet, covered in various bits of meat, blood, and entrails, with little bits of pig fat clinging here and there like gobs of dandruff, and his boots looked like he'd been sloshing through a vat of hamburg. Yuck! Heck, I might have even taken a shower and washed my hair. I'd probably have to be unconscious before I'd go anywhere looking (and smelling) like that. I can only imagine what the hospital staff must have thought before he explained that he'd cut himself while gutting a pig. They were probably wondering what the other guy looked like. Even after the explanation, the female staff were probably thinking "well, he could have at least changed his shoes!"
Fortunately he missed the tendon and didn't do any serious damage. And it was also fortunate he was using a very sharp knife. It was a nice clean cut. 3 stitches, a tetanus shot, and a prescription for antibiotics later, and we were on our way home via the drugstore. We delivered the dead bodies to the butcher later in the evening.
Now here's my thoughts: I could have cleaned that cut out with saline then stitched it right up for him. Horse tail hair makes great stitching. I've stitched up sheep and they didn't complain - well, not much. I even have tetanus vaccine here. OK, so it's a CDT combination but look at it this way - he'd never get any form of entertoxemia caused by Clostridium perfringens types C & D either. (If you don't know what that is then you're not a sheep, goat or cow person. Perfringens is also called over-eating disease. I figure he could maybe use that one.) As for the antibiotic I've got a choice of either long-acting penicillin, LA200, or Nuflor. My needles are a little large for human comfort but they'd do the job just fine I imagine. And I could tell he didn't damage the tendon because his finger wasn't drooping. Funny thing though - he opted for the hospital ER and the co-pay. Imagine that?! The doctor told him to come back in 10 days to have the stitches removed. What? Do people really go to the doctor for that? I've always taken out my own, and taken my own casts off too. Don't you?
BTW, when I got home the chickens had spread that big pile of shavings pretty evenly over their coop floor. Such nice, helpful girls.