Law enforcement has asked that this photo be shared everywhere. Celina Cass, age 11, is missing from her home in W. Stewardstown, NH, since Monday, 7/25/11, at 9pm. She is described as 5 feet, 5 inches tall, weighing about 95 pounds, with hazel eyes and waste-length brown hair. She was last seen wearing a pink shirt, a pink pullover, blue shorts and shoes. If you have ANY information at all that you feel is relevant to her disappearance or whereabouts please contact New Hampshire State Police at 603-846-3333.

Post Script: 8/1/11 - After a massive search effort by local authorities, volunteers from various places and organizations, State police from several states, Fish and Game, Border Patrol, the FBI and the Canadian Royal Mounted Police, divers discovered Celina's body this morning in the Connecticut River about 1/2 mile north of her home. Please pray for comfort for the family, friends and community that are devastated by this horrible act, and that whoever is responsible is quickly brought to justice.
Please leave a comment below. I love hearing from you.

My birthday bouquet from my sweet hubby. He even remembered that I love yellow flowers. On the note card he said he's taking my out to my favorite restaurant Saturday night. YUM! BTW, just in case you're wondering why he told me that on the card rather than in person, it's because he's gone for work from Monday through Friday. He retires at the end of this year so we'll be able to talk face to face every day rather than over the phone and email. 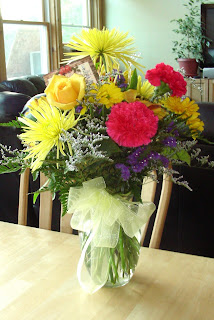 Not a great way to start the day. Just sayin'. 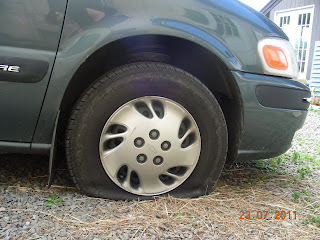 In the grand scheme of things, the two things I'm thankful for this morning may seem trivial to the general populace. But you fellow homesteaders, as well as dog owners, will totally relate, I'm sure.
The first thing I'm thankful for is dogs who convinced the skunk that was heading toward the meat chickens, to change direction. They further convinced the skunk that a late night chicken dinner wasn't in its best interest. This is not an open-all-night KFC drive-thru, or in this case, walk-thru. After all, that's why we have dogs - 2 Great Pyrenees livestock guardians, and 2 English Shepherds who provide backup as needed.

I can picture the whole episode - poor skunk is out for a late night stroll, meandering across the lower pasture, and smells chickens. Oh, yummy chickens. Live chickens. Juicy chickens. Young, tender, 4 week old chickens. And in it's vast experience it realizes that these chickens are concentrated in one area - a chicken pen! What luck. To have all those live, juicy, tender, young chickens in a cage, on the ground no less, just waiting for a beautiful skunk, such as itself, to pop open a corner of the chicken wire, slip inside, and have a captive audience so to speak. Then, out of nowhere these huge white beasts come crashing up to the fence, barking and snarling, bent on eating said skunk for their late night snack. And what's even worse, there are 2 rust colored beasts right behind them, obviously with the same vicious intentions. Now really, what's a poor defenseless skunk to do? These snarling, viscous beasts can, without a doubt, run faster than the skunk, are much larger, and definitely have bigger teeth. The poor skunk has no choice, turn and spray in the direction of the beasts.
Which brings me to the second thing on my thankful list. A fence that kept the dogs away from the skunk while it was making that very wise decision to seek dinner elsewhere. The dogs obviously intercepted the skunk while it was still a suitable distance from the fence and weren't close enough to get sprayed. While my yard was very stinky for a while, it was definitely preferable to having to bathe 4 dogs in tomato juice. You might say that the skunk got skunked!

"Every time I lose a dog they take a piece of my heart with them. And every new dog who comes into my life, gifts me with a piece of their heart. If I live long enough, all the components of my heart will be dog, and I will become as generous and loving as they are." ~~Author Unknown~~

Indy - (Gunmettle's Independence Day) 5/4/98-7/13/11.
You will be loved and remembered forever. Well done, faithful friend.
Please leave a comment below. I love hearing from you.