Sponsor A Cheese, Save A Dairy!

I'm sharing this very important information via The Never Done Farm. Let's all stand together to protect our consumer rights to choose our own food.
One of our members over at the Homesteading Today forums is currently under attack for selling raw milk cheese. Now mind you they have been doing so for 30 years, have never had a case of illness from their cheese and have a substantial client base that is happy with their product. Here is a news article on their story. You can follow their saga on their blog here. One of the members over at HT came up with the idea to "Sponsor a Cheese" to help out Morningland Dairy and to help show that people are willing to stand up for our family farms. Here is her idea:
Sponsor A Cheese, Save A Dairy!
I'll assume most of us are aware of the assault against Morningland Dairy that began back in August, and has resulted in anti-raw milk pencil pushers (and toadies of corporate dairy concerns) demanding that the dairy destroy all their cheese in stock (SIX MONTHS WORTH OF PRODUCT!) -- despite the fact that all FDA testing done at the dairy proved that there is absolutely NO contamination of their healthy food.
So... I had an idea. Here's what I am going to do, and if you'd like to do the same, I certainly encourage you to join the Un-Cheese Party!
Here's the low down:
If Morningland can't sell the cheese because the Missouri Milk Board and the FDA are against wholesome food, they may well lose their family business of THIRTY YEARS. (And through all those years they are able to boast the NO ONE has EVER been made ill by their cheese!)
I'm not going to let that happen if I can help it.
I'm going to "sponsor" a few pounds of that embargoed cheese. I invite anyone else who is interested to join me in our
CYPER-SPACE UN-CHEESE PARTY!
There are 50,000 pounds of cheese slated for destruction. This is not counting the cheese destroyed due to the recall.
Here's how to SPONSOR A CHEESE:
The average price per pound is $5. You can paypal a donation to

Or, you can send your sponsorship checks or money orders directly to the dairy. Just let them know what the money is for, and a note of encouragement would certainly be appreciated.
Morningland Dairy
6248 County Road 2980
Mountain View, MO 65548
Now, folks, this is a PARTY, so INVITE YOUR FRIENDS, your neighbors, your mere acquaintances to join us!
Plaster the message on other boards you frequent, put it on your Facebook Status, make a YouTube video and hey! maybe it'll go viral!
We have to stand together as raw milk consumers and producers, or we WILL see the day where we can't even grow food for our own consumption!
(see the thread, "Another threat against raw milk" [at http://www.homesteadingtoday.com/] for sample letters to write to your politicians to make an even bigger impact.)
Let's get Morningland back on its feet-
SAVE THE CHEESE!!!
We'll be sponsoring some cheese, how about you? If we, as small farmers and consumers, don't stand firmly together, it isn't just Morningland Dairy that looses, we ALL do! Below are some links that you may well find interesting and informative. The government, FDA, CDC, DHHS and others, have no business tellling you what you can consume and what you can't, but if SB510 passes that is exactly what will happen. Please call your Senators and let them know what you think and ask that they vote "NO" to SB510. There are proposals to ask for an amendment but IMHO this bill needs to be killed completely. I've even called our Governor asking that "if" this bill passes that they block it with state law. Remember it's your freedom of choice that is at stake and all because of the GREED and CONTROL of Big Industry!
http://usfoodtrace.com/information/political/sb510
Farm to Consumer Legal Defense Fund
Farm and Ranch Freedom Alliance
Please leave a comment below. I love hearing from you.

We had a bear climb into the pig pasture to see if there were any leftovers on the ground, which there usually are. After all, we're talking about pigs here. They don't exactly have the best table manners. The bear came in after dark when everyone was sleeping. Now imagine you're a pig, sound asleep, dreaming of the slop fairy. You hear a noise and think "Wow, there's really is a slop fairy, and I actually hear her." You open a sleepy eye expecting to actually discover her, only to see a bear just a few feet from you. You can imagine the ruckus that ensued. Squealing piglets (and I use that term loosely because they're about 100 pounds now, but still only about 3 months old) running everywhere, mama pig attacking the bear, dogs barking, human mama (that'd be me) running from the house, spotlight in hand, screaming at the top of her lungs, did I mention the barking, and charging, dogs? At this point your sympathies have to be with the poor bear. All he (or she) was doing was trying to quietly scoff a few leftover morsels, the bear equivalent of raiding the refrigerator at midnight. Before making a getaway over the perimeter fence, the bear struck out with one paw and swatted the closest pig which happened to be Melvin, the only spotted pig in the litter, who went sailing through the air, landing on a pile of brush. After everyone calmed down a bit I was able to assess the injuries to Melvin. There wasn't a mark on him but you could tell he was injured. We took him to the barn for the night but in the morning it was determined he must have internal injuries so Melvin was given a one-way ticket to freezer camp. Farewell Melvin. May you rest eternally in slop heaven.
Please leave a comment below. I love hearing from you. 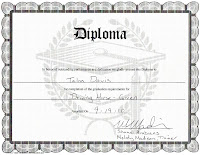 Talon graduated from driving school today. He even got a diploma! Our trainer did a fantastic, super-duper job. Now it's time to enjoy all he's learned - and we've even got some beautiful fall weather left. I'm going to have to search out sleigh runners for the cart for this winter. Oh, the adventures we're going to have!
Please leave a comment below. I love hearing from you.

I went to a friend's house to help worm her sheep. Problem is, my friend doesn't have a catch pen, which, by the way, is next on my list of things to help her with. Yes, sheep are dumb, arguably the dumbest creatures on earth. But for all their stupidity they sure can run fast if they sense danger. Let's see - stranger in the pasture who's intent on catching them, could be to eat them? That smells like danger. The first sheep wasn't too hard to catch as it was raised as a bottle baby. But it was all downhill from there. You can only trick them for so long before they finally decide "No way am I going to let this strange person with that dangerous looking drench gun anywhere near me! I may be dumb, but I'm not stupid!" The last sheep to be wormed was a very large, hairy beast with a definite attitude. She decided after watching me with the first sheep that it was infinitely safer to be on the other side of the pasture from wherever I was. If I was at one corner, she was at the other. Where ever I moved, she moved opposite. Finally I got a bucket of grain and threw some down at my feet. Ahhh, the stomach of a sheep wins over their common sense every time. As the other sheep, who had forgiven me by this time, gathered around stuffing their faces, this big girl came closer and closer, all the while watching me. I just stood there gently dropping grain on the ground, not daring to move. She edged closer, closer, closer... until she was right at my feet, pushing her greedy nose into the middle of the flock to get her share. When the time was right I sprang into action. Simultaneously dropping the grain bucket and launching myself into the air, I grabbed the fleece at her neck with both hands. The awesome speed with which I landed on her back took her by surprise. It also spooked the rest of the flock who frantically ran in every direction. She zigged, then zagged, then took off at a dead run for what seemed like 3 miles, then suddenly collapsed in a heap. When the dust cleared I was still attached and laying on top of her. Did I mention she was a very large sheep? It was like doing a 5 point restraint on a Shetland pony! My friend, who I think was selling tickets to the event and her daughter was selling popcorn, ran over with a looped rope, slipped it over her neck, and said "OK, I've got her, you can get off now." Yeah, right. I'm 62 years old. I have an iffy back, a bum knee and 40 lbs too much in the middle. I just wrestled a bucking bronco and now I'm laying on top of a hairy mountain. Sure, I'll get right on that. I did finally get upright, although I'm sure it wasn't graceful. We got the sheep up, wormed her and took the rope off her neck. What did she do next? She just stood there looking up at me. "Hey lady, that was kind of fun. Can we have another go round?"