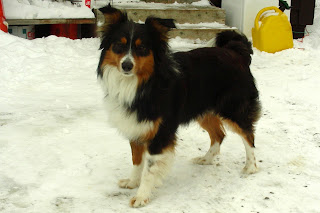 This is Nicky. He's visiting for a few weeks while his family is on vacation. Nicky is actually a half-brother to my 2 English Shepherds, Roxie and Jack. After the initial introductions, which were less than favorable about a new dog being added to the group, Nicky has been trying to make friends. It hasn't been going well. At times it's downright ugly.

I needed a new bale of hay brought into the barn. These aren't just ordinary bales mind you, they're the big round ones wrapped in white plastic, look like giant marshmallows and weight a bazillion pounds. The only way to move them is with the tractor and a chain. Not a hard task, but definitely "man work". I reminded GS (grandson) yesterday that he needed to move a bale into the barn for me and suggested he do it during daylight. I had enough hay for last night but definitely needed that bale for morning feeding. He insisted that he'd do it this morning. Well, this morning came and he was having tractor problems. It seems that one of the front tractor wheels freezes up overnight and won't turn until it thaws out. Apparently this isn't the first time it's happened so it shouldn't have come as a surprise. He then made the crazy suggestion that, instead of moving the bale into the barn, I open it outside and just take hay off it, then cover it with a tarp, or move it myself later when the wheel thawed. I mentioned that perhaps he should have moved it yesterday when I asked, informed him that I was NOT going to be taking hay off it outside or move it myself, and he'd better figure a way to get the tractor problems solved quickly so the horse could be fed. He was in a hurry to go snowboarding with a friend, hence the suggestion that I just take hay off it outside, then move it myself later on. I then commented that with 2 menfolk in the house there were certain things that I shouldn't have to be concerning myself with, and #1 on that list was tractor problems, #2 was working with a big bale of hay myself. I then posed the question "If I have to do it myself then why do I keep menfolk around?" Now here's where he was quick on the draw. Without hesitation he answered, "to blame things on when things go wrong." Yup, he's learning.

We had a big storm over the weekend. Saturday the temps were way above freezing and it rained all day. The snow went down about 2', which is good considering what happened Sunday. The weather forecast predicted falling temps on Sunday with lots of snow expected. Since the weather was fairly warm on Saturday, with cold weather and snow returning for Sunday and Monday, it would have been a good day to make sure the tractor was fueled up and the extra gas can filled with diesel. But that wouldn't have been very exciting, and certainly wouldn't have been blog worthy. I mean, what would the post look like? Hmmmm..... "Saturday - since the weather was fairly warm, although steady rain, DH and GS (grandson) spent the day filling the tractor and making sure the diesel can was also full. Sunday and Monday - they plowed periodically to keep ahead of the 2 1/2 feet of snow that fell over the 2 days." That was about as boring as my old high school diary.
This is what actually happened: Saturday - DH and GS spent the day doing various things, then DH settled down for his afternoon nap. In the evening DH took GS to work then picked him up later. DH and I watched a movie in the evening. Sunday - DH and GS went to church, I stayed home because I was still sick with the tail end of the flu that hit me the week before. DH took GS to work and picked him up later. Then DH and I watched another movie in the evening. All day we watched the snow fall. Monday - GS starts to plow the driveway, informs DH that the gas tank has only 2 bars of fuel. DH hunts for gas can that is buried under the snow somewhere. GS gets a path plowed so DH can drive the truck out and trek to town to get diesel. Meanwhile, GS continues to plow, stopping when the fuel gets to 1 bar as we've been informed that we shouldn't let the tractor actually run out of gas. DH gets home and sees the tractor just sitting there, gets mad because more plowing wasn't done. I inform him that he was the one who told us not to let the tractor run dry and GS had just come into the house a few minutes before, while waiting for more fuel. DH stomps out of the house, puts the gas in the tractor, and continues to plow the driveway. GS stomps off to room and bangs on drums. DH plowed for several hours, GS banged on drums for several hours. I made lunch. The snow continued to fall. Later in the day DH took GS to work and picked him up after.
This morning the driveway needed plowing again as we got another 6" of snow. Before he left for work, DH went into town and filled up the diesel can again. I'd like to think he was doing some advance planning but more likely it's because DH needed to take the truck with him this week, which left me with his car. Diesel cans don't do well on the carpeting in the trunk of a small car.