Plan for Friday - give Talon, the horse, a bath and grooming to get him all prettied up for the 2 day riding clinic in VT Saturday and Sunday, also do some more trailer loading practice. Actual day - trailer him 1 1/2 hours away so vet can stitch up his face after he impaled himself on the horse trailer and slashed open the side of his jaw. He loaded beautifully earlier this week so I wanted to do more practice yesterday. He freaked! I remained relatively calm till I saw his face gushing blood, then I freaked! A very good friend came over with her big stock trailer (picture barn on wheels), assured me it wasn't that bad and he wasn't going to bleed to death, drove us to the vets and waited several hours with me till the vet could fit him in for emergency surgery to sedate him and stitch him up. I'm sure my friend had plans of her own on a beautiful Friday afternoon.

Now to estimate the cost - The weekend clinic was $150, then figure the cost of a 4 hour round trip both days, snacks on the road and lunch at a restaurant. The vet bill was $252.68 to be exact and a 3 hour round trip, no snacks. According to my calculations the clinic plan would have been more expensive, but also more fun. Talon won't be able to wear a halter or bridle for at least a month until his face heals as the gash is right where the bridle sits just above his mouth. But when it does heal we need more trailer practice!
Please leave a comment below. I love hearing from you.

Are You My Mother?

Remi, our female Great Pyrenees LGD (livestock guardian dog) has really taken a protective role with Babydoll, our goat kid with the broken leg (click here if you've forgotten that story). She began by protecting her from the other goats who go into a feeding frenzy at milking time (cue theme song from Jaws). Remi would sit in the corner of the barn with Baby behind her and growl if any of the others got too close to "her" injured kid. Since Baby's cast can't get wet she stays in the barn and doesn't go out to graze with the others. Remi stayed behind to keep her company. As the days have passed Remi and Baby have formed a friendship and a close bond. I often see Baby curled up, nesting in Remi's soft white fur. Last night it was a little chilly here in northern New Hampshire. But Baby was quite warm and cozy curled up with her new best friend. 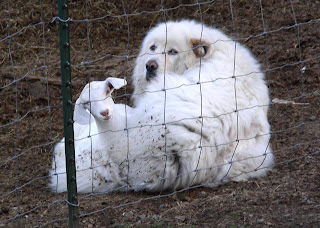 These Pyrs never cease to amaze me. Whether they're protecting eggs (see story here), or keeping kids warm, or treeing bears (yes, they do that too) they're ever watchful, vigilant and protective. It's nice to know my farm is in capable hands 24 hours a day, 7 days a week.
Please leave a comment below. I love hearing from you.

No one else ever has a chicken on them, but Brandy usually has one. Maybe she's extra comfortable, perhaps she's the only one who doesn't mind, maybe it's because while all the others are out stuffing their faces Brandy prefers to be at the barn at every opportunity, or maybe she has an itchy back and sees the benefit of a free back scratch. Whatever the reason, Brandy seems to be the chicken's choice for roosts. 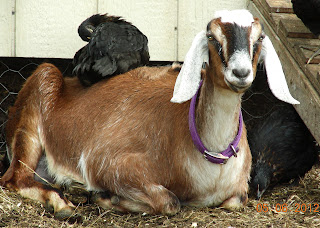 Actually, 3 fat pigs. 3 VERY fat pigs! No, I'm not insulting anyone, nor am I giving a new twist to the 3 Little Pigs story. We actually have 3 morbidly obese pigs. Here's the story:

DH loves pigs. It's his favorite farm animal. I hate pigs and I'm actually afraid of them. I can handle a buck in rut with no problem. After all, he's a vegetarian and he's only being territorial about his does in heat. (City folk might refer to them as a billy goat and nannies, that is, before I inform them of the proper terms. But I digress.) The buck just wants to be sure no one steals his precious does from him. Knowing this, he's easy to deal with. He can be bought, after all. If I want to borrow a doe all it requires is some grain and, typical guy, he's then thinking about his stomach and doesn't even notice that he's missing a few of his beautiful ladies. But a pig is an omnivore which means it eats just about anything, meat included. An 800 pound sow that might look at me as lunch is a potential problem. We've had pigs in the past and if it weren't for my 2 English Shepherds watching my back I just might have been the main course several times. Pigs don't like me either, but I'll save that story for another time. Let's just say the feeling is mutual.

The last pig to claim residency here was the aforementioned 800 pound sow who pushed me from behind and knocked me over. Needless to say the dogs weren't approving of her treatment of me and chased her off with much barking, snarling and gnashing of teeth. The dogs did the snarling etc., the sow just ran for it after the first well placed bite to her hind legs. Surprisingly the dogs didn't leave a mark on her. We know this because we inspected her hide very closely after she was hanging from the tractor bucket a few days later (AFTER she was slaughtered of course). I have a motto on this farm - be nice or be tasty.

So we've been pigless for a few years. DH has been talking about getting pigs again. Knowing my fear of them he decided on a smaller, more docile breed called a Guinea Hog. The males get 300 pounds tops, the females somewhere in the 200 to 250 range. While he was looking for someone who sold this breed, an online friend offered to sell me her adult boar and 2 sows for very reasonable money. She thought the sows might be pregnant based on timing from their last litter. We agreed to buy them and picked them up last Saturday.


Here's what a Guinea Hog is SUPPOSED to look like:

Kind of a smallish chubby bear kind of thing. Not too big, short legs, definitely not as threatening as the usual big commercial pig. I was expecting to see something like that.

HOLY COW, or in this case HOLY FAT PIGS! One of the things my husband learned about this breed is that they're easy keepers and it's easy to overfeed them. Overfeed them? These hogs have gluttony down to an art form! Here's what the hogs we got look like: 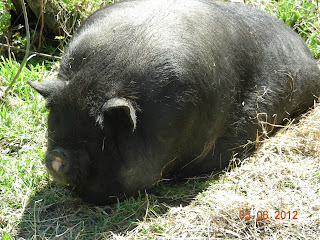 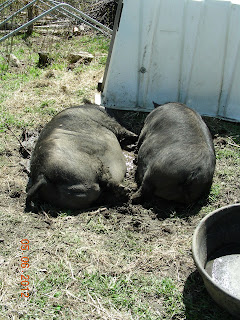 Bottom line (if you'll forgive the pun) is that I think there are at least 3 someones on this farm that are on a diet! I'll let you know how it goes.
Please leave a comment below. I love hearing from you.

Poor Baby - we brought home a new goat on Saturday - Baby Doll, a 5 week old Snubian (cross of a Saanen and a Nubian). Poor thing broke her leg yesterday. She was racing off the stairs and got her leg caught. She kept going, her leg didn't. Needless to say she's had a rough weekend - she left her home and many friends her age for a new home with only 1 friend (we only have 1 other baby goat), then broke her leg on Sunday. But all is not lost. She got plenty of cuddles on the couch with daddy and even got to sleep in the house in a dog crate next to my bed. Went to the vet this morning to have her checked out. He was impressed at the "cast" I put on her leg. She has to keep the soft cast on for 4 weeks and not get it wet. Yeah, right!
Please leave a comment below. I love hearing from you.

Gabriel, our 120 lb Great Pyrenees LGD, has always liked the chickens, and particularly the chicks. We've often found him laying in the brooder area with chicks climbing all over him. When he thinks they're cold he'll push them under the heat light. When we have dead chickens we throw them out to the dogs and Remi, our other LGD, will eat hers straight off but Gabe carries his around for days protecting it from further harm. We're never sure whether he actually eats it or just finally has to abandon it to come in for food. But what we found yesterday just topped it all off. Gabe was laying in the corner of the barn and refused to move. DH finally got his big butt to push over and what we discovered made us speechless. There was Gabe laying on a nest of several eggs the chickens had secretly laid in the corner behind the wheelbarrow! 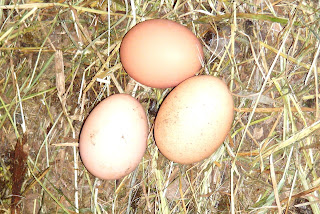 Good grief, don't let him into the chicken coop. He could never fit into one of the nest boxes!!!! 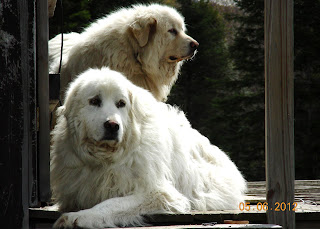 Gabe: "Hey, they took away my eggs. I loved those eggs. Not fair!"
Remi: "Did someone say eggs? Eggs are yummy! Is it snack time?"
Please leave a comment below. I love hearing from you.