July 27, 1948 - a very, very important day in history. Although there don't seem to be many events associated with this day in 1948, there are a few notable births: 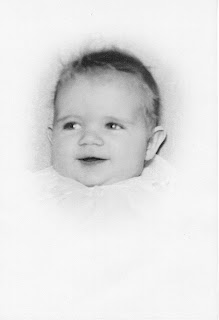 The garden is making a comeback after it suffered "death by goat" over the July 4th weekend. (Click here for a refresher on that story.) The squash and cucumbers have loads of blossoms, beans and peas are coming along nicely, the replanted broccoli and cauliflower are starting to look like I just might get something before frost, the tomatoes which weren't actually eaten but got trampled by hooves that were frantically trying to exit the garden ahead of the barking and snarling English Shepherds ("You don't belong in Mom's garden! Get out NOW! Do you hear me? I said, NOW!"), have loads of blossoms and tomatoes about the size of small plums. Now, promise you won't laugh. This is the first of the vegies to be picked - 3 green beans. I guess that means I can literally have a "3 bean salad" for lunch! 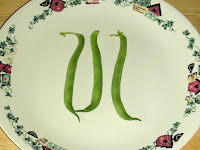 Over at A Homesteading Neophyte you can enter to win a Trekker 72 hour kit from Emergency Essentials. You can also pledge to blog for 24 hours straight to raise money to help the Downed Bikers Association. It's for a good cause so take a click over there and check it out. The contest ends 7/31 at midnight. 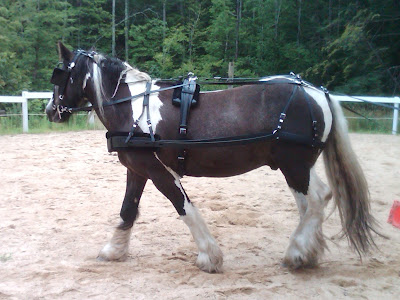 Talon's harness got delivered this week. Now he looks "official". After a slow start because he was so "sensitive", he's now actually ground driving. I'm visiting tomorrow and bringing his cart with me. Maybe he'll be ready for it in another week. I'm so looking forward to learning how to drive myself. Now doesn't he look like he's an old pro at this driving thing? Blinders on, reins up over his rump and everything. I'm so impressed!
Please leave a comment below. I love hearing from you.

Now That Gets My Goat! 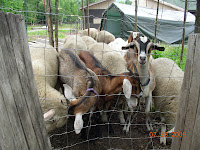 Why is it that on a farm that has goats, most of the things that really get your goat actually involve goats? Anyone who doesn't have goats just can't even begin to appreciate the way they seem to outsmart you almost constantly.

Saturday they broke into my garden. I heard the dogs barking like crazy and went out on the deck to see what all the brouhaha was about. There, in the garden where there should have been peas, broccoli, cauliflower, corn, and such, were the goats. The only things they didn't eat were the tomatoes, summer squash, zucchini and radishes. I made a trip to the farm store this morning to see if, by some miracle, they had any plants left. Well it seems that if you wait long enough everything is just about free. I got an entire flat of veges for $5! Pumpkin plants were free and now that I have less in my garden I actually have room for some. I just spent one of the hottest days of the summer replanting the garden. I'm not sure if there's time for everything to mature before frost, which is usually about the 1st week in September, but if we have a very warm summer, and if I fertilize like crazy, and if I can keep the goats out of there......

Now where's my camera when I need it?!!! Obviously not with me, or you would have been able to see this for yourself. I was in town today to do some errands and happened to drive down the street where all the parade floats awaited the start of the 4th of July parade. There were the usual patriotic floats, the fire department engines, the school king and queen, the high school band, and the local boy scout troop. All the usual floats and groups you'd expect. But the float that really caught my eye, and I have no idea what company or organization it represented, had some folks dressed in denim coveralls, a few guys with guitars and an outhouse on the back. It had only the lower 1/2 of the walls and inside, I swear I'm not making this up, was a guy sitting there reading what looked like an old Sears catalog! I can only hope he wasn't going to throw Tootsie Rolls at the crowd! Yup, you might be a redneck if you ride in the outhouse of a parade float, no matter that it's in northern NH.
Please leave a comment below. I love hearing from you.