I recently read an article on feeding sprouted grains to livestock. The theory is that whole grains contain an enzyme inhibitor and it takes a lot of the animal's energy to digest them. However, sprouted grains no longer have the inhibitors but now contain the proper digestive enzymes so the animal can utilize the nutrition. Sprouting also increases the nutritional content of each grain.

I used to raise sprouts years ago when I had rabbits. The goats and chickens ate what the rabbits didn't finish but I really didn't pay attention to any benefits realized from the sprouts, mostly because I wasn't looking for any.

This time I wanted to see just what difference sprouts would make in milk production. All but one of my does are nursing kids so it's impossible to tell if their milk production has increased, but the one gal who isn't nursing has almost doubled in production. I didn't test the milk before the addition of the sprouts but it now has a yellowish color and my customers have commented that the milk is a lot creamier. An added benefit is that the picky eaters in the group are no longer picky eaters. They all devour the sprouts, which I have replaced about 1/2 their grain ration with, and the picky ones have increased appetite for even their dairy goat sweet feed.

Here's my experience with different types of sprouted gains so far:

Corn seemed like the easiest to try but I found it takes a long time to sprout and the goats didn't really like it. So I fed it to the chickens and they took a long time to eat it as well.

Oats sprout easily. I soak them covered in water for several hours, rinse out the dirt and put them in a tray, rinsing them several times a day. They are ready in about 3 days. I don't wait for green shoots because by that time the roots would be a jumbled mass. The protein content of oats goes from about 13% for the raw berries to between 15 to 28% sprouted. I'm not sure why the big range in %. Perhaps someone reading this will know and share their knowledge with me. (Edit: I found an article that states sprouts are at about 18% protein when the white shoots are about 1/8" long. The highest protein would be from oat grass but you would only harvest the green fodder, not the roots. That's way too much trouble for my setup.)

Rye seeds sprout very quickly, ready in a day or 2. The goats absolutely love them when they just break through the seed hull but not so much when they get beyond that to the point where their roots get tangled. While the 15% protein is not as high as oats, the benefit is that they are ready quicker if you should be delayed in the oat sprout production.

I haven't tried any other sprouts as here in the north country that's about all that's economically available.

Here's the sprouting process I used. First I filled a 3 qt grain scoop with the berries.

Then I soaked those for about 12 hours in a bucket of water. I added a few handfuls of sunflower seeds as those sprout at about the same rate as the oat berries.

After rinsing, I put them in a tray that I had drilled small drain holes in the bottom and larger drain holes in the cover so they drained from one through the next when stacked. (Edit: You can also put them in a bucket with holes. That might save some space but I found the tray is easier to scoop a measured portion from. Whatever you use you'll have to periodically disinfect it, and the ones below it, because the tray begins to grow mold after several uses.)

I rinsed them with water several times a day. The top tray drains down through the 2nd, through the 3rd or 4th and into the bottom tray which doesn't have drain holes in the bottom so it acts as a catch basin for the water draining down through. I put a small piece of 2x4 under one end so the water drained better. Each day I start a new tray after I use one so the trays were started on consecutive days. (Edit: I gave the drain water to the chickens as I imagine it has a lot of nutrients in it. Being chickens, they love it!)
I used these trays from amazon.com
https://smile.amazon.com/gp/product/B06ZZDC235/ref=ppx_yo_dt_b_asin_title_o03_s00?ie=UTF8&psc=1 and they are just the right size for a full scoop of berries.

So far I'm thrilled with the sprouting project. The goats love them, milk production has increased, milk seems to have higher butterfat, and I'm feeding 1/2 the amount of grain. If you try this process please comment to let me know how you're doing with it. 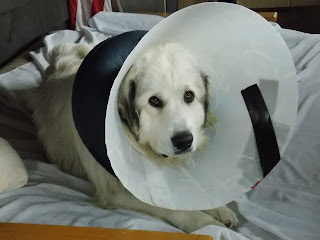