It's been quite a while since I've posted. A lot has happened recently and I hardly know where to begin.

Let's see - in February I had the 2nd surgery on my right foot to fuse the big toe joint that got crushed about 4 years ago when a 4x8 sheet of plywood fell on it from about 3' up. Ouch! Spent about 2 weeks on the couch with my foot up, then had a walking boot for 3 months. Meanwhile, all the grandkids moved out. Talon was sold to a vacation farm place in PA. Apparently city folk will actually pay to muck stalls and milk goats. Who knew? They also bought the saddle that I'd had made for him. The round pen was sold a few weeks ago, then last week the horse trailer was sold. A few weeks back someone came to buy 1 goat and ended up with 5 goats and 4 pigs. So - we're down 3 grandkids, 1 horse and saddle, 5 goats, 4 pigs, 1 horse trailer, 1 round pen and, oh yes, we sold our van today. Now I've got to list a treeless saddle and pad, and a few miscellaneous horsey type things, on Ebay. I'm also selling a few ADGA registered Nubian does if anyone's interested.

We did, however, buy an LGD puppy known as a Colorado Mountain Dog, which is kind of a cross of Great Pyrenees and Anatolian Shepherd. She's 8 weeks old and about the cutest thing this side of a baby panda. Introducing Libby, short for Liberty Bell: 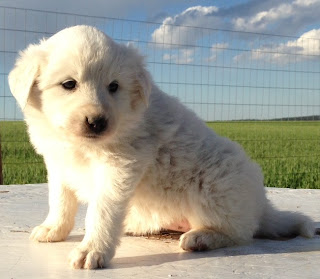 She's not old enough to be with the goats yet because she has to get over the jumping/biting stage and get big enough so she can fend off butting goat mamas. But she's sectioned off in a place where she can see them but can't get to them, or them to her. There's quite a bit of curiosity at the gate.

Gabriel has been the one to accept her first, allowing her to sleep with him and eat alongside. It's tough for a pup to become one of the pack. Remi, on the other hand, thinks she's about as annoying as a giant gnat! It's going to take a while before Remi gives her stamp of approval, but I'll bet they'll be playing before the end of the month. 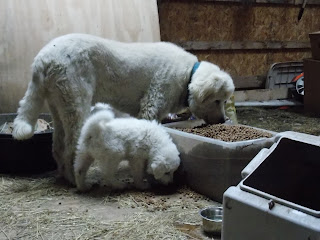